AN EVENING OF UNSCRUPULOUS WONDERMENTS

Lance Norris' new stage show, An Evening of Unscrupulous Wonderments is currently booking theatre and festival dates for 2020. Please see the link to the left for more information. With the passing of Tony Randall the term 'raconteur' never gets used anymore, but it must surely apply to Lance Norris. A long time veteran of Boston radio (WZLX, WBCN, WAAF, WTKK, MIKE-FM), Norris has been seen in Academy Award winning films MYSTIC RIVER and GLORY, as well as lighter fare like THE INVENTION OF LYING, THE TOWN and WITH HONORS. Norris has also written for TV on the Emmy nominated Politically Incorrect and Saturday Night Live as well as the quickly canceled Mike O'Malley Show.

Lance Norris is an entertainer who is considered the father of Rock & Roll Mentalism. His unique blend of ability, talent and humor create a challenging, stimulating and much in demand experience for all. The range of Norris’ abilities includes ESP, Mind Reading, Psychokinesis, and Suggestion. 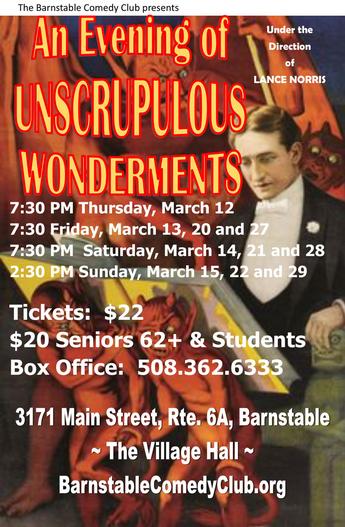 Norris, a former card carrying member of the liberal media elite, often conducts experiments in subliminal persuasion as it relates to the movies or Rock & Roll music. Of course the term ‘subliminal’ is technically archaic, hopelessly bound to the concept of a well-defined sensory threshold which was made obsolete by the introduction of signal detection theory into psychology.

Norris, who has made his archaic presences felt subliminally in theatres across North America, the Caribbean and China, often demonstrate how this influence represents a social threat and how we are all already greatly, even unfairly, being influenced by carefully crafted psychologically sophisticated persuasion tactics. Fun for the whole family. His humor has been published in magazines as far a field as National Lampoon, Entertainment Weekly, People, Hustler and Mad. The author of several books and screenplays, as well as acting, directing and writing for the stage; it's no wonder he had to recently close his comedy club 'The Bitter Man'.

Please note that Lance does not do private readings any longer. Lance Norris is a nationally renowned spirit medium, teacher, lecturer, holistic healer, and author of over 30 books. Norris, along with Dutchco International, are bringing forth this inspirational, “out of this world” style special presentation. Lance is co-founder of the non-profit organization, Dog Track Gravy and he is an associate member of the Licensed Private Detective Association of Massachusetts, SAG, AFTRA and the DGA. He has been featured in numerous articles and can be heard on radio stations around the country. Additionally, Lance has appeared on 20/20 and several other TV shows. Lance resides in a small town south of Boston, Massachusetts with his wife, five children and several other wild animals.

For further information about Lance, his appearance calendar, or to subscribe to his free e-mail newsletter just look up and to your left.